I hope you enjoy the ups and downs of Tara and Andy.

A Match Made in Plaid

A chance encounter with a roguish, kilt-wearing lord at a historical Highland reenactment has Tara Holder dreaming of a better life. When she discovers her summer job involves working with the sexy Scot who literally swept her off her feet, she’s torn between wanting to remain professional or to shag him for all he’s worth.
Andy Campbell has big plans for the family castle, ones that will once and for all prove he’s worthy of being in charge. He doesn’t need interference from the new castle manger his mother hired. When he realizes the manager is none other than the lovely wisp of a woman he “married” and kissed at the fair, he’s suspicious of his matchmaking mother’s attempt to find him a real bride. He’s determined to keep his distance despite being plagued with dreams of the alluring lass wearing his plaid…and nothing else.

Years ago, I was fortunate enough to travel to Scotland and to stay in a castle. During our stay, we learned that a former guard tower could be rented as a studio apartment, and that there were other outbuildings that could be rented for holiday as well. The place is run by the lady of the house. There’s been a residence since the 1400s at this site. It’s been in this particular branch of the family since the 1600s. That’s some serious history.

During my stay, my imagination ran amok. I kept wondering how I could use this for a book. At the time, I didn’t have a good idea, so I tucked it away for later.

Over time, my mind kept wandering to my stay in Scotland and all the holiday lettings at this castle. I started a first chapter and sent it to my local RWA chapter’s critique group. One of my author friends mentioned that I had to have a better reason for the two people to be at the castle together.

I grumbled for a while, as we writers do when someone shoots down an idea (though she did do it in a very constructive way). Yet, I overcame the grumbling in my head to consider her words. What would keep two different people of different backgrounds in the same place?

I had two answers.

And that’s all I’ll say now. Match Made in Plaid will be published by The Wild Rose Press.

Ursula Whistler is happy to announce the release of Je T’aime, A Candy Hearts Romance. The title of this short story is taken from one of the new sayings added for the 2015 Valentine’s season. Je t’aime means “I love you” in French, and she used a trip she took years ago to the south of France as inspiration for the setting. From the sun setting over the Rhone River to the medieval hilltop town of Le Castellet, go on a journey with the heroine as she navigates the language of the country as well as the hero.

Part of the Candy Hearts series

Looking for inspiration, designer Genevieve Hoffman agrees to an apartment swap and heads to the south of France. But when the apartment owner’s brother returns from deployment, she finds herself  with a man who inspires fantasies rather than fashion.

Etienne Gagnon barely made it out of Syria alive during his last special forces assignment. All he wants is a little R&R in the apartment he shares with his sister. But the woman making breakfast in his kitchen isn’t his sister. He might not understand a word coming out of her mouth but he has no problem reading body language and likes what she’s saying just fine.

With no more delays, he strode out the door and smiled at her dancing as she cooked in the small kitchen. Her back was to him. Her long black ponytail swung back and forth, opposite her hips. She’d lost some weight, too. Her bare legs had more tone than he remembered from last summer when she’d joined him at the gym. She was singing with such volume she didn’t hear him.

He took advantage of her distraction and grabbed her around the waist as he announced in French, “Surprise! I’m home!”

She snapped her head back, whacking the back of her head into his nose. Sharp pain made him grab his face, letting go of her. Her well-placed elbow cracked against his rib cage. An oof escaped his lips as he absorbed the blow. He backed away just in time to avoid a round kick to his knee. He let go of his side and put both hands in front of his chest in self-defense mode. She’d not land any more hits. “Brigitte! Why? It’s me! Stop this!”

This wasn’t his stepsister. This woman resembled her greatly, except she had larger breasts, better legs, and excellent self-defense tactics. She yelled in English. What she said was a mystery, but her face and body language told him everything he needed to know. She was fully prepared to kick his ass.

Check out the other stories released today in the same series:

Ever After by Candace Sams and One Kiss by Misty Simon 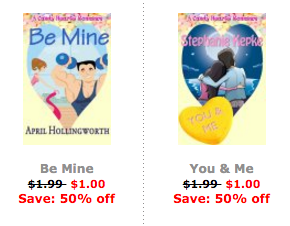 It’s wonderful being part of a fun, sexy, playful series like the Candy Hearts Romances from The Wild Rose Press. Today, You’re Tops by Sydney St. Claire, Be Mine by April Hollingworth, and You & Me by Stephanie Kepke. (I’ve linked to You’re Tops separately since it is from the Wilder Roses ;-))

Available on Jan 25, 2016, you can get my wilder rose addition to this series:

Get your Candy Hearts Romances here!

Between now and Valentine’s Day, there will be releases of the Candy Hearts Romances by various authors at the Wild Rose Press.

All the titles and stories are based on the sayings on candy hearts. These short stories are sure to bring some romance into your days. Remember to give the authors some love by leaving a review somewhere.

We’re also having a Rafflecopter for a Kindle Fire!

Get your Candy Hearts Romances here!